She and Her Waking 2

He’s still not quite there yet, but recently Will has come to show more varied expression when compared to before.
It’s very fresh as by default he was almost expressionless. Probably it’s because there’s Brother and Freed around, who are also his childhood friends.
He’s still often stiff when he’s with me, so maybe he’s just weak with women.

“Lidi still isn’t in her usual condition. Let’s get straight to the point already”

I thought it’d go on forever. Standing behind me, Freed broached the subject.
In response to that, the expressions of those three stiffened and they nodded.
First of all, Freed began explaining the situation.
Before the three came I’d roughly heard the story, apparently Freed postponed the talk about the attack until I woke up.
I was honestly pleased by such a consideration.

“… Then, Lidi used neutralization magic to extinguish the flames”

After concluding the report on the topic of neutralization magic, Freed’s words stopped.
Everybody sank into silence. Even so, I could tell their gazes gathered on me.
Somehow it’s painful. When I spontaneously hung my head, Freed behind me put his hand on my shoulder.
I felt just a little relieved by the temperature transmitted from his palm.

“O, oi, Freed. So you’re saying that Lidi may be the neutralization magic user?”

Brother probably solidified from surprise at first, but before long he fearfully asked to confirm.
Freed answered, astounded.

“You’re the first who suspected the involvement of neutralization magic, Alex. It’s not surprising it came up here”
“No, that’s right. But I never would have thought it would be Lidi. After all she can’t use magic properly”

“I also suspected the possibility of neutralization magic, but for it to be Lidi…”

Again the attention gathered on me. Seeing everybody’s dubious expressions, I understood they wish for me to answer.

“… I’ve also been made aware of it just recently. But it seems like it”
“Seems like it, you! Why have you kept such an important thing to yourself!”

Freed admonished Brother who flared up.

“Calm down, Alex. Lidi too has her circumstances. The person who taught Lidi about neutralization magic seems to have advised her that it’s better to keep it a secret”
“…! Who is that person”

Even as Brother glared at him, Freed kept his calm.

“I can’t say that. But I guarantee they aren’t a strange person. Besides, I think it’s a right advice”

“That’s… Well, it ain’t normal magic, so it’s not like I can’t understand wanting to hide it… Rather, are they really not a strange person”
“Actually I met that person directly. Can’t you trust me with that?”

As Freed’s tone of voice change, Brother shook his head in surprise.

Brother backed down, and this time Will asked me.

When I tilted my head unable to follow, everybody asked back. Seeing their faces saying Do you not get it, I tried thinking very carefully.
‘Magical Reduction Bottle’. It’s about the bottle Crown Prince Maximilian had.
Thanks to the magic of that bottle never invoking I wasn’t kidnapped to Sahaja, but certainly…
… Nn?

Everybody nodded with straight faces.

Come to think of it――――.
I suddenly understood the conditions were met.
The bottle – I feel like I touched it. Intent – I feel like I hated it.
The invocation conditions are ‘touch’ and ‘intent’, yup, I completely cleared them.
Ooh! Thinking so I took a breath and spoke.

Everybody got drained of strength by the iffy answer.
Freed said while stroking my hair.

“That’s how it is. I also think it’s Lidi who voided the barrier. As Alex was saying, she must have triggered neutralization magic. Probably unconsciously. I can’t think of any other explanation”
“Even I couldn’t erase His Highness’s barrier without leaving the traces of magical arts. If Lidi can use neutralization magic, there’s no mistaking it”

Will also nodded.
Honestly, I wasn’t aware of the barrier, so even if I’m told that it doesn’t click with me.
But since I’m told that, I feel it might be so.
When I vaguely nodded, Freed asked me.

“Lidi, do you understand the conditions to invoke neutralization magic?”
“Yup, there are two, ‘touch’ and ‘intent’”
“You don’t need a formula or incantation?”

As Will asked another question, I denied.
If I needed to such things, there’s no way I could use it.

I don’t quite understand these circumstances. When I scowled at a loss for the answer, instead Freed gave his personal opinion.

“It’s just my personal opinion, but isn’t it natural to think that she couldn’t use it because she has a different system of magic?”
“Your Highness… That’s right. Certainly, when I think about it this way, I can understand why Lidi hasn’t been able to use magic until now. I’ve always found it strange she couldn’t use it despite her magical power”
“Then…”

Freed answered Will’s doubt. Then with a serious face Will answered.
In the twinkling of an eye it turned into a technical discussion about magical arts.
While I was listening in silence to the conversation that I was unable to follow, before my eyes Brother deeply sighed.
I couldn’t ignore the overly ostentatious sigh, so although reluctantly I looked at Brother.

“What”
“Nothing, I just thought that you really are outside the norm”

I’m offended. Reflexively I talked back.

“It’s not really my fault”

It’s not the power I wished for. If possible, I too would like to use magic and magical arts like everybody.
While I scowled at Brother, Glenn next to him calmly smiled.

“Now now. Please calm down both of you. However Lidi, I think you did well to jump in front of the flames. Weren’t you scared?”

Having a simple question thrown at me, I was rendered speechless for just a moment.

Although he asked back to prompt me, I sank into silence.
For some reason it’s difficult to say “I wanted to save Freed” in front of everyone.
Because, looking at it calmly, isn’t that line awfully embarrassing.
At that time I could put it into words thanks to my feelings being agitated by the fight, but normally it’s impossible to say such an embarrassing line without being bashful.
While I was thinking of how to gloss over it, unsurprisingly unable to come out with it, Freed concluded his talk with Will, and facing us said.

“With this I understand. The ability user behind the barrier and magical reduction bottle we have been searching for is unmistakably Lidi”

I was relieved he changed the topic seeing I’m in trouble.
While scratching his head, Brother agreed with Freed’s words.

“That’s right. Well… I’m glad it wasn’t something like an assassin. But Freed, what will you do from now on? Neutralization magic users are super rare, see? In theory they would normally come under the protection of the Royal Palace and be made to join the Magician Division”
“Certainly. Supposing it’s necessary, I will bear the responsibility for looking after her in the Magician Division…”

Freed cut off Brother’s and Will’s words as unnecessary.

“Protection or whatever, Lidi is my consort. If anything happens, I’ll protect her. I have no intention of bringing her to the battlefield, much less of having her use her ability. Even if my Esteemed Father ordered me, I will oppose it”

When Freed clearly declared that, both Will and Brother nodded.

“You’re right. It’s unreasonable to bring Lidi to the battlefield. I agree with His Highness”
“Well, I thought it’d be like that. I’m also against bringing her to the battlefield… Then so nothing unnecessary happens we better restrict this subject to us here. There’s nobody talkative here”
“I will only talk to Esteemed Father and the Prime Minister. Then unless something important happens I will leave it to Esteemed Father. Lidi, is that fine?”
“Yup”

When everybody agreed, Will again called out to me.

Will hesitated a little, still he resolutely asked me.

“Um, if possible, could you show me neutralization magic. I’ve only ever read about it in literature, I’ve never actually seen it used. I want to check how it is with my own eyes…”
“Okay”

As always, when it comes to magical arts he becomes talkative. While just a little astounded, since there’s no particular problem with it I agreed.
Then it gathered the expected interest.
The two other people beside Freed leaned forward. I felt a little excitement on their faces.
Freed just bitterly smiled and didn’t particularly say anything.
Seems there’s no problem using it.

“Sorry. Then right away… Here”

Will made a small magic formation appear on his palm. From it a small red fireball floated.
While watching the mysterious spectacle in fascination, I confirmed.

Recall the sensation when I extinguished the large flames. While thinking that the flame should disappear, I brought my hand near.
When I brought my hand so close I was almost touching it, the flames and magic formation all of a sudden disappeared as if dispelled.

Brother leaked a sigh of admiration.

Glenn too shook his head in disbelief.

“… It was extinguished in an instant? Without an incantation or magic formation? I knew about it from literature… but is the magic system itself different” 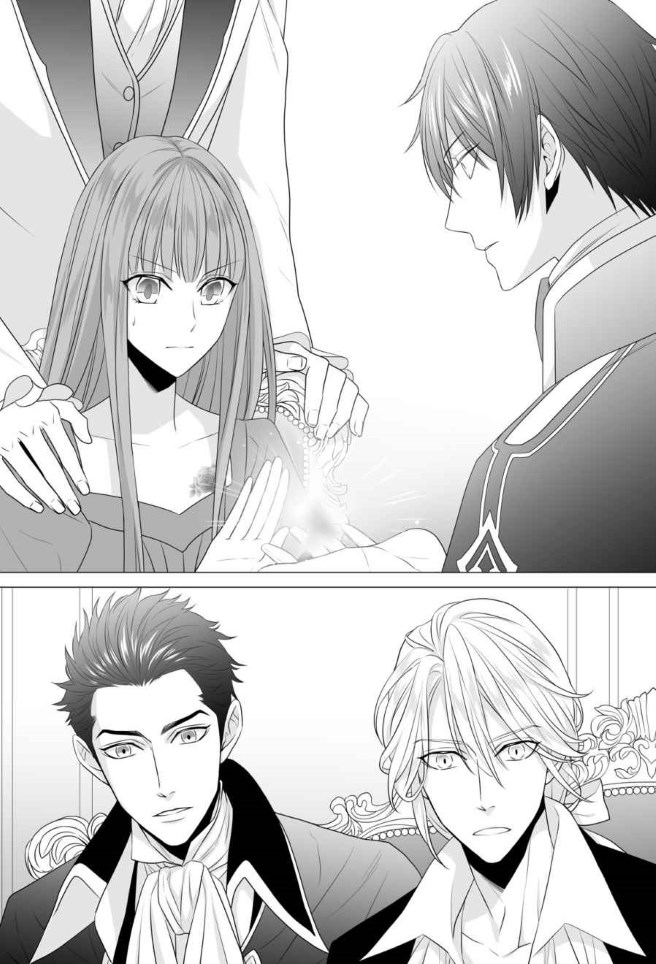 Will entered the world of his own.
Truly the Magician Division Commander.
It seems he’s more curious about its workings than the method of invocation. What’s the technique, he was muttering.
Freed summarized our talk.

Everybody firmly nodded to Freed who informed them sharply.
In response Freed said.

“I’ll report to Father and the Prime Minister. Alex, is that fine?”
“Yeah, please do”
“Then, let’s finish at it today. Lidi is recovering. It’s undesirable to restrain her for too long”

Although I’m more or less happy about the concern, I objected.

Will agreed with Freed’s words.

“It’s as His Highness says… Sorry for forcing you. We will leave. Your Highness, excuse us with this”
“Yeah”

Brother, Glenn, and Will obediently left the room as urged.
Just like that it returned to the two of us.
Although it was a conversation with the people I know, after all I might have been nervous.
Phew, I let out a big breath as soon as we were alone.
Freed, who had been standing behind me all the time, moved in front of me and grasped my hand. When I dropped my gaze to it, I noticed I was wearing the ring I’d received from Freed.
The moment I recalled that time, I spontaneously became embarrassed.

Freed said so and our eyes met.
While flustered, I replied.

“… I, I’m fine”
“Nope. You’re unexpectedly oblivious to yourself. It’s enough for today, so rest at ease. Until Lidi falls asleep, I’ll stay with you”
“But, Freed…”

I silently complained that he still has work to do, but he shook his head with a smile.

“I can catch up in no time, so don’t worry about it, Lidi. Here”

Freed scooped me up and moved me to the bedroom.
I was put on the bed and instructed to rest.

“I’m not sleepy… But what about Freed”
“Didn’t I say I’m fine. I’ll sleep hugging Lidi tonight, so it’s alright”

Recalling that he hadn’t slept for a long time I tried objecting, but he lightly dodged it.

Following the calm voice, I reluctantly closed my eyes.
I thought I wouldn’t be sleepy had I done so, and yet I felt like my consciousness somehow blurred.

Unintentionally I called his name.
I could hear him giggle, followed by his pleasant, low voice.

Reassured by those words, I let out a deep breath.

Noticing he dropped a kiss on my forehead, while my consciousness was fading my mouth slackened.
Yup, this is happiness.

Just like that, without seeing any dreams I fell asleep again.

View all posts by jingle

This site uses Akismet to reduce spam. Learn how your comment data is processed.